Best Trackball Mouse: 4 things to consider before choosing one 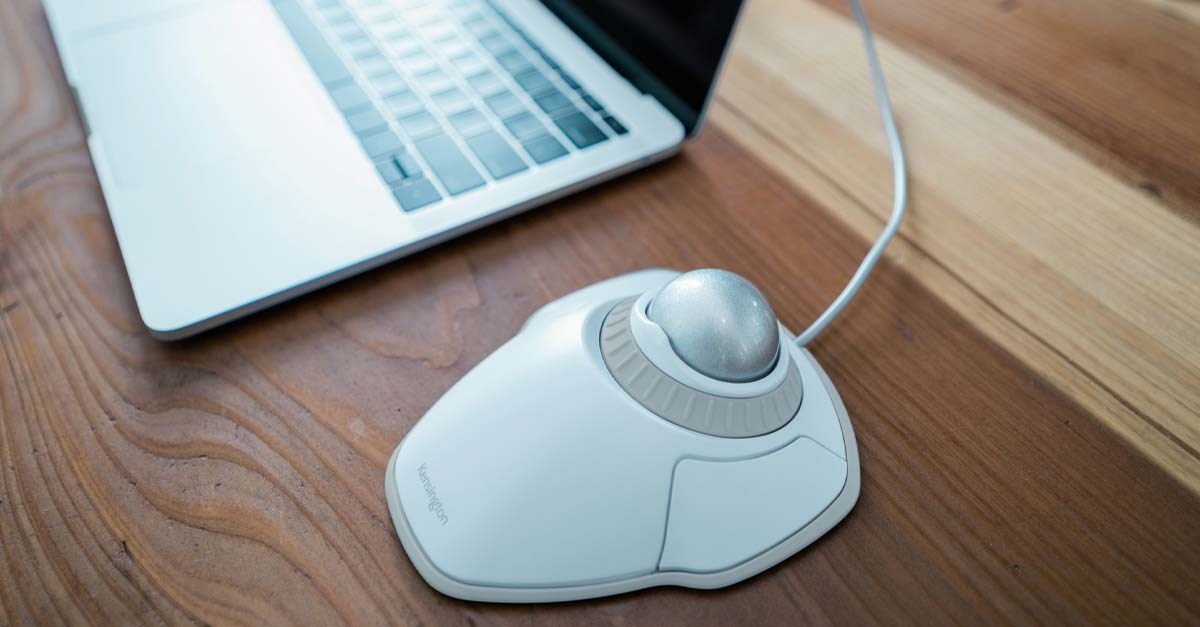 There are 4 things you need to consider before choosing a trackball mouse:

How to choose the best trackball mouse:

Purchasing a computer peripheral device is always a matter of styles and preferences but sometimes it could be a little confusing, especially if you have a lot of options and don’t know how to handle the large amounts of technical and commercial information available.

Here are 4 things to consider before choosing one: price, available space and placement, wired or wireless, and suitability.

Kensington offers you a wide range of trackball models, wired and wireless, thumb-operated and finger-operated, with affordable prices. Ranging from $29.99 to $109.99, you will find a Kensington trackball that fits all your needs and preferences and save money from your budget!

Trackballs tend to be bigger and heavier than a conventional computer mouse, but they are stationary peripheral hardware and therefore don’t need to be moved around while operating which gives you more control and comfort and makes them a great alternative to save space on your desk or workstation.

What is a trackball mouse?

A trackball mouse is a computer peripheral hardware with the same functionalities as common mice but its main feature is a rotating sphere, called trackball, placed in the upper face, or in a side, of the device which allows the user to move the cursor on a computer screen.

Due to some similarities with the common mouse, the trackball is often considered to be a particular kind of mouse and, in consequence, this device is sometimes named trackball mouse.

You might be interested in comparing trackball vs mouse. Well, trackballs have some important differences with respect to the common computer mouse.

What is a trackball in simple words?

A trackball is a computer input pointing device used to control the screen-based movement and to enter motion data into a wide range of electronic devices, from personal computers, arcade games, mixing boards, and self-serve kiosks, to industrial and/or military applications.

The main feature that distinguishes a trackball from a mouse or other common peripheral computer input hardware, such as trackpads or joysticks, is a rotating ball held by a socket containing sensors to detect the movements of the ball.

Thus, in a trackball the user rotates the ball with its thumb, palm, or fingers to move the cursor through the monitor screen while the main body of the device remains motionless and the arm and shoulder of the user rest in a more comfortable position.

Trackballs also have buttons that allow the user to make selections and input data on screen and have the same functions that in a conventional mouse. Some trackballs have customizable buttons, giving the user the possibility to program some additional functions.

What is the trackball used for?

Trackballs have a wide range of applications. Trackballs can be used with personal computers and laptops for every common purpose, such as working and gaming, as they have the same functionalities as a traditional computer mouse.

Trackballs are widely used for some specialized purposes just like graphic design and visual arts, or computer-aided design (CAD) in engineering projects. Trackballs are also employed by many computer programming professionals and other people who spend a lot of time with computers because they find them more comfortable than the traditional mouse.

The trackballs are also used in some scientific, military, and industrial applications, for example, to provide control or guidance of industrial equipment, robot arms, and/or special purpose vehicles, input data on specialized industrial computers, and so on.

Trackballs are used in several non-domestic, non-industrial, non-scientific, and non-military applications, for leisure and commercial purposes, such as some arcade games, mixing boards, and self-serve kiosks. Trackballs are also used for medical and therapeutic purposes, to aid children, disabled or old people with limited motor skills who found it difficult to use the common computer mouse.

How do I choose a trackball mouse?

First time trackball user! Did I choose well? There are some things to consider when you choose a trackball mouse.

When you are looking for a trackball you want to obtain the maximum of functionalities and advantages for the best price. Kensington offers you different trackball models to match your needs at affordable prices.

The best budget choice is the Kensington Orbit® Optical Trackball. This is a wired, finger-operated trackball with optical tracking technology, a scroll ring and 2 programmable buttons, just for $29.99.

If you need more functions then you should try the Kensington Pro Fit® Ergo Vertical Wireless Trackball. This is a cordless, right hand thumb-operated trackball with 9 customizable buttons which can be connected with 3 different devices simultaneously, and just for $79.99.

And the best trackball overall is the Kensington Expert Mouse® Wireless Trackball. This is a finger-operated device, suitable for right-handed, left-handed, and ambidextrous users, with a scroll ring and 4 programmable buttons, recommended for high accuracy and high-performance applications, just for $109.99.

Trackballs tend to be bigger and heavier than a conventional computer mouse, but require less space to be operated and they also provide enhanced accuracy and increased control over the cursor movements on the screen.

Models like the Orbit® Trackball with Scroll Ring and the Kensington Pro Fit® Ergo Vertical Wireless Trackball offer you a lot of functionality in a compact device.

Other models, like the Kensington SlimBlade™ Trackball and the Kensington Expert Mouse® Wireless Trackball, are bigger than a conventional computer mouse but they are very appropriate for more sophisticated applications such as professional graphic design.

If you have little space on your desk, or if you prefer to use your computer from a bed, sofa, or another place different from your traditional workstation, then you should consider using a Kensington trackball.

Usually, this choice depends on the user's preferences. However, you must consider some things before choosing a wired or a wireless trackball.

Wired trackballs provide you the reliability of operation, as you are not going powerless, and they tend to be cheaper than comparable wireless devices.

Wireless trackballs give you more flexibility because you are not limited by the cable extension, thus wireless trackballs are suitable to use your computer outdoors, in cafés, public places, or while traveling in a car, airplane, or train.

However, as withother wireless devices, their batteries must be recharged periodically to avoid going powerless at the least opportune moment.

4) Trackballs are suitable for all - Buy the right one for you!

Ergonomics is very important, and even more if you spend a long time using your computer every day. The right trackball will provide you with all the functionalities you need but also comfort and control, reducing the stress on your fingers, hands, wrist, and arm.

Trackballs are designed and built in a wide range of sizes, wired or wireless. Thus, when you are looking for a trackball mouse you just have to choose one model that adapts to the space available and makes you feel comfortable.

What is a good trackball?

A good trackball is that which satisfies the needs of the user, has the best functionalities, provides the most comfort, and all these at the best price. Of course, each user has to decide which is the best trackball, but there are some important things to consider and evaluate when choosing the right trackball.

A good trackball must be compatible with the most important computer operating systems. For some special purposes, such as professional graphic design, compatibility with specialized hardware and software can be required.

A good trackball has at least the same functionalities as a conventional computer mouse. Usually, trackballs have customizable buttons to allow the user program specific functions.

All Kensington trackball products have customizable buttons which make them ideal for special purposes such as professional graphic design or high-performance gaming.

In computer pointing devices such as trackballs and mice, the accuracy of the device is measured in DPI (dots per inch). Different accuracy levels are required for different applications.

A good trackball has an appropriate accuracy level for most purposes. Typical values are around 400-500 DPI.

Are trackballs worth it?

Yes! Trackballs are worth it!

Trackballs are ideal in many aspects, such as comfort, ergonomics, functionalities and accuracy.

Trackballs are also suitable for children, disabled or old people with reduced or limited motor skills who find it difficult to use the conventional computer mouse.

Additionally, there are wired and wireless trackballs, suitable for almost every domestic, corporative, commercial, professional, industrial, scientific and/or military application. And all these for an affordable price!

Kensington has a wide range of trackballs products, wired and wireless, thumb-operated and finger-operated, for general purposes and for advanced users, with prices from $29.99 to $109.99.

If you are looking for a good trackball mouse, Kensington trackballs have the best profit/price ratio, excellent quality devices with a sophisticated and elegant style, suitable to match your needs at affordable prices.

Trackballs are at least as accurate, and sometimes are even more accurate, than other computer input pointing devices such as traditional mice and trackpads. However, accuracy depends on several factors such as the nature of the use or the skills of the user.

Trackballs are at least or even more accurate than a traditional computer mouse in a wide range of common tasks, but for some specialized purposes, such as professional graphic design, high-performance gaming, or computer-aided design (CAD) engineering projects accuracy must be evaluated.

In professional graphic design or computer-aided design (CAD) engineering projects to draw or follow a straight line with a trackball could be a little difficult, as the motion of the cursor on screen is determined by the rotation of the ball. Some high-performance gamers have reported lower accuracy in screen movements when playing.

However, both difficulties can be overcome with enough practice. Most trackballs users are accustomed to the traditional computer mouse but, when they change to trackballs and develop enough skills, even for the most sophisticated tasks many of the users find trackballs more accurate.

Trackballs are more ergonomic and comfortable than many traditional computer mice. This feature gives your wrist, arm, and shoulder more rest than other computer input pointing devices over long periods of computer work or gaming.

Thumb-operated trackballs are specifically designed for left-handed or right-handed users; they have the rotating ball placed on one side of the device while the base resembles a conventional computer mouse.

What are the disadvantages of a trackball?

As with every other thing, trackballs have some disadvantages.

For some specific purposes, for example, to draw or follow straight lines through the computer screen, trackballs could show lower accuracy than a conventional computer mouse.

This is not such a big issue unless you perform advanced tasks in professional graphic design or sophisticated computer-aided design (CAD) engineering projects.

Moreover, all the parts and components of the device (scroll rings, spheres, bearings, the internal socket bay, and even the trackball) must be cleaned regularly to avoid poor trackball performance due to dirt or gunk accumulation.